skip to main | skip to sidebar

It seems I've reached the storage limit on Blogger (boo) so I'm moving over to Wordpress!


Allie in Wonderland
Posted by Allie at 13:00 2 comments:

I mentioned the other day that I'd been meaning to make these butternut squash enchiladas for about 10 days...and last night I finally managed to make them!

The original recipe called for quite a lot of cheese, and browned butter, but I wanted to make it healthier so I left out the cheese and butter, used unsweetened almond milk for the sauce, and instead of tortillas I used Mountain Bread corn wraps (which I get from my local organic supermarket). I also halved the recipe - although I ended up getting a bit overenthusiastic with my squash chopping, so I had some of the filling left over which I'm going to have with pasta for tomorrow's supper. And I got some lovely black kale in my veg box this week (no Veg Box Day post, though, I'm afraid - I got home late on Tuesday night after a book launch party and just chucked everything in the fridge!) so I put some of that into the filling as well.

It wasn't the most attractive of things to photograph... 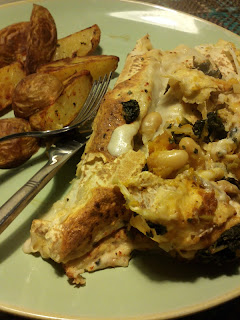 ...but it tasted really good!

On another note, the Christmas lights are up in Ealing. I checked back through last year's posts, and they've been switched on a whole 10 days earlier this year! I suppose it's definitely beginning to look a little bit like Christmas... 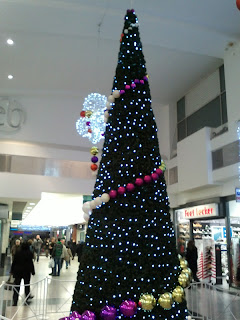 I love my Riverford veg box, but it does occasionally create veg mountains. As well as the perpetual potato mountain (there are currently two bags of potatoes in my fridge and another is arriving on Tuesday...I need to find more things to do with potatoes...!) this week I had two butternut squash taking up space in the fridge. For about a week now I've been meaning to make these butternut squash enchiladas, but various things keep getting in the way and I just haven't managed it. I considered making them on Friday night, but a rather scary (and thankfully now fixed) water leak on Thursday evening put paid to Friday's supermarket trip, so I didn't have any tortillas. I still fancied making something with squash, though, so I decided to have a go at a pizza.

I used Jamie Oliver's pizza dough recipe, which always comes out perfectly, cutting the proportions down to a quarter of the original recipe to make one generous pizza for greedy old me. While the dough was doing its thing I roasted the squash, and then I put the whole thing together with the remains of that tomato and pepper sauce I made the other week and some yummy mozzarella (and possibly just a little touch of Laughing Cow blue cheese..!) 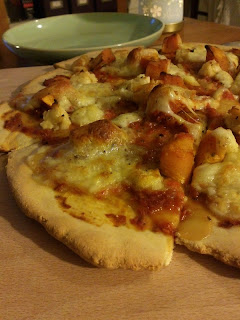 It was fab! Perfect Friday night food.
Posted by Allie at 16:33 1 comment:

Bonfire Night isn't until tomorrow, but this weekend has been full of organised fireworks displays all over the place. I'm lucky enough to have a particularly fantastic one right on my doorstep at my local cricket club - people come from miles around and there's a huge crowd, mulled wine, an enormous bonfire and a brilliant half-hour fireworks extravaganza. Apart from one shower, the weather was crisp and cold and perfect for fireworks! 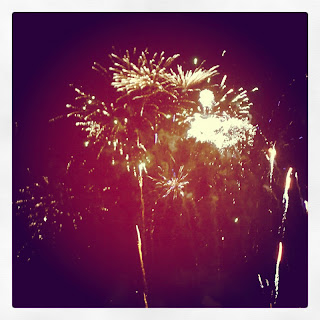 I went with a gang of running club people, and of course rather than attempt to cram ourselves into one of the local pubs afterwards, we sent a couple of the boys down to the corner shop and crammed ourselves into my flat instead for dodgy wine (apparently the only white on offer was Black Tower...!) and a ton of crisps and pizza. Thankfully I'd done my 12-mile run in the morning!

I also went to the V&A's Hollywood Costume exhibition yesterday, which was fab. I really don't know a lot about films (it's always best to assume I haven't seen things, because I probably haven't...) but even I could recognise the iconic costumes from films through the ages. My favourites were a perfectly 60s green skirt and jumper combo from Mildred Pierce, and a navy sparkly number from Chicago. And of course there were Dorothy's iconic ruby red slippers - although they're more than a little shabby and faded these days! I'd definitely recommend going if you can get a ticket!

And finally, this week I discovered this... 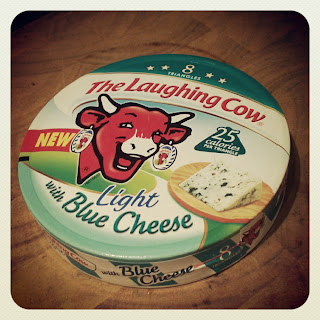 Ooh yeah. Can't wait to make a butternut squash risotto and stir a bit of that in! In other news, I've started my Christmas shopping...
Posted by Allie at 16:02 No comments:

Email ThisBlogThis!Share to TwitterShare to FacebookShare to Pinterest
Labels: autumn, cooking, food, London, out and about

No drama this week! My veg box arrived on time and with everything where it should be. Plus it was cheap as chips, thanks to the lovely people at Riverford putting a £5 credit on my account to make up for the mix-up with the last box! 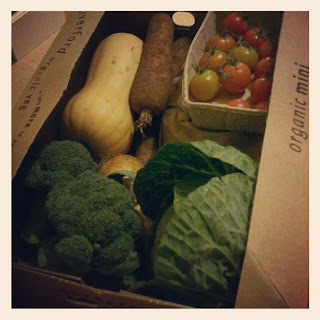 So my box contained a butternut squash, some carrots, a few onions, a bag of potatoes, broccoli, a Savoy cabbage and some cherry tomatoes. All good stuff, although I am getting a little tired of small potatoes - I want to make mash and jacket potatoes, and small ones are no good for that!

Anyway, I had an evening in last night so I decided to do some cooking. I still had carrots, potatoes and a sorry-looking red pepper left over from my last veg box, so I made carrot and coriander soup and a roasted tomato and pepper pasta sauce. For the soup I fried an onion with garlic, ground coriander, cumin and turmeric before adding the carrots, some chopped potatoes and some veg stock and simmering it until the veg was all nice and soft. I then used my stick blender to whizz it into a smooth soup - although I did manage to splatter myself and the kitchen in the process! The sauce was even easier - I just whacked the tomatoes and chopped-up pepper into the oven with a couple of cloves of garlic, a spritz of olive oil and some black pepper, and then when it was roasted I whizzed that up as well. It smells delicious and I can't wait to eat it!

In other news, I spotted some festive lights last night! Usually I'd moan about it being too early, but since the clocks went back at the weekend I still haven't got used to these dark evenings, and with the weather being so chilly it's nice to have a bit of sparkle around! 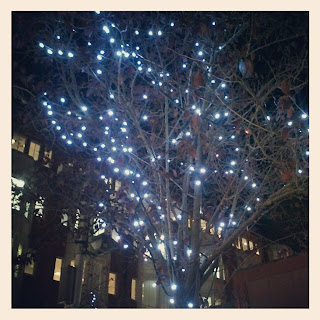 ...or The Mystery of the Missing Box!

Yes, this post is a whole week late. That's because there was a bit of intrigue surrounding last week's veg box delivery! Mainly because it didn't arrive on Tuesday as it ought to have done. I emailed my delivery person but didn't hear anything, and I started to wonder whether I'd got the wrong week (apart from the fact that the money had come out of my account).

Then, on Thursday morning, I went downstairs to go to work and there was my veg box, sitting in the hallway! There was a note attached from a very apologetic neighbour of mine, who evidently also has Riverford boxes delivered - they'd delivered mine to her house instead, and it had taken her a day to realise it was the wrong week for her box! Very nice (and honest) of her to return it - and she was mortified by the fact that she'd eaten my swiss chard!

So eventually, I got my box - minus the chard but with a cute little butternut squash, a green cabbage, potatoes, red peppers, carrots and mushrooms. I then went away for the weekend, so I haven't used much of my veg yet, but this evening I made some yummy fajitas. 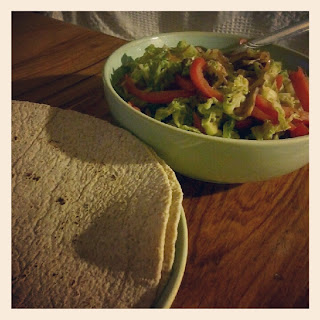 I just fried some onion, one of the peppers, a load of mushrooms and a big handful of cabbage with some smoked paprika, chilli flakes and a clove of gorgeous smoked garlic (which I picked up at a fab smokery near my parents' house) and wrapped all the veg up in a couple of tortillas. Well, actually they were Loyd Grossman chapattis, which I've been meaning to try for ages - they're far lower in calories than tortilla wraps (under 100 per chapatti) and they were really tasty! 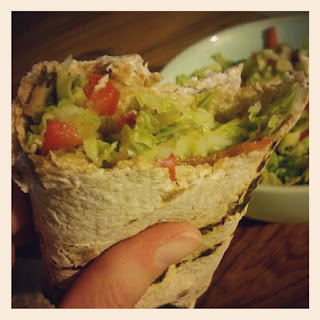 Yep, this evening I decided to have a go at making crumpets. And it was a great success! I'd been out for an enormous pub lunch (I had a gorgeous grilled aubergine 'steak' topped with tomato sauce and grilled goat's cheese, with just about every vegetable imaginable - cabbage, broccoli, cauliflower cheese, carrots, roast butternut squash, parsnips and roast potatoes - and a Yorkshire pud) but I still fancied something for supper. I thought about making some pancakes, or maybe scrambled eggs...but then the idea of crumpets popped into my head and I decided to be brave and give it a go! It was a bit scary because the recipe involved yeast and yeast is always a bit of a worry for some reason, but I should have known good old Delia wouldn't let me down. 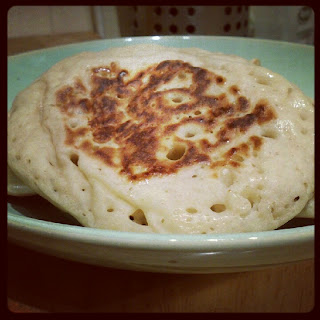 I halved the recipe because I didn't think I could quite manage 12 of them in one sitting, and while they came out a bit flatter than Delia's (I didn't have a crumpet/egg ring so I just spooned the mixture into the pan, which meant they didn't have any support to let them form proper crumpet shapes) they were absolutely delicious and I was seriously impressed by how easy they were to make! 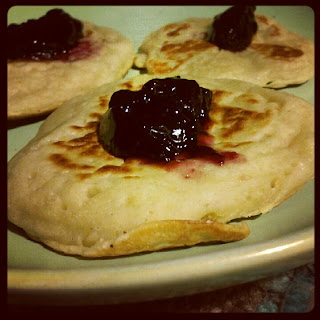